Hello everyone! Wishing you all a happy new year!

Here is this week's ichimen, it's the first one of the year :) It was super interesting, it treats a cultural topic of Japan, and talks about the lowering of the voting age which Sho strongly supported, so it's a really cute Ichimen because you can feel Sho really really really wanted to talk about it XD 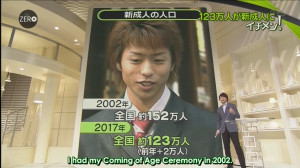 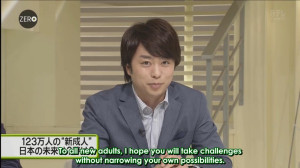 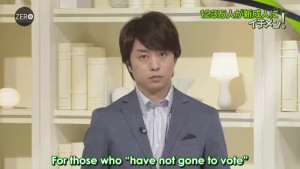 Next time you consider not going to vote, remember that Sakurai Sho is secretly judging you! (ok I may have cheated and make the sub start earlier just to make this screencap XD)

A quick note  for those who are not familiar with Japan's Coming of age day (there was no way I could put this as notes in the video XD):

Coming of Age Day is a Japanese holiday held annually on the second Monday of January. It is held in order to congratulate and encourage all those who have reached the age of majority (20 years old) over the past year, and to help them realize that they have become adults. Festivities include coming of age ceremonies held at local and prefectural offices, as well as after-parties among family and friends.
The holiday was first established in 1948, to be held every year on January 15. In 2000, as a result of the Happy Monday System, Coming of Age Day was changed to the second Monday in January.
Until recently, all young adults attending the coming of age ceremony were exactly 20, having held their 20th birthday after the previous year's Coming of Age Day but before (or on) the present Coming of Age Day. (Wikipedia)

Thanks as always to "Arashi English translation" for letting me use her work, please support her by visiting her Facebook page.
You can also follow me on Twitter to get updates on the subs.