Here is this week's ichimen about Saudi Arabi's King visit to Japan.
Now I want you all to give the translator a round of applause! Because the subject was quite difficult to translate as it's mainly political, and a sensitive subject currently, and we both read maaaaaaaaaaaaany articles online on the subject.
You will find some articles we did some research on at the end of this post if you're interested, mainly regarding Trump's relationship with Russia, Saudi Arabia and Syria as it was brought up by Murao-san.
Many thanks to @Hodosakurai for helping us too :) 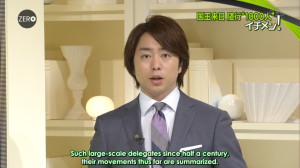 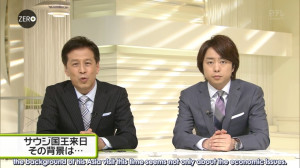 Here are the bit of articles we're sharing, covering Murao-san's comment. Some are from Japanese news websites, so ARASHI English translation translated them for you :)

Translator's comment: Murao-san’s comment might have suggested a correlation between Trump administration’s motivation to improve relationship with Russia and US’ involvement and change of policy on Syrian Civil War. Murao-san’s wording was subtle. Winkychan and I have discussed on the translation and we came up with a literal one, while we have researched what media portrayed this. Below are some selected articles / coverage for your further interest.
From the articles below, several points may be concluded:


We hope that these readings would supplement Murao-san’s comment and our interpretation to Murao-san’s comment. Please note that our research is not an academic one, it does not cover all the available materials, the selection and analysis of materials may be subject to various biases. We welcome further discussion on this issue. Thanks.
17.03.17 AP : “Trump has spoken glowingly of Russian President Vladimir Putin and expressed hopes for closer cooperation with Moscow.”
17.02.07 Reuters Commentary : “If the Trump-Putin relationship stays warm, the U.S. president might consider cutting off support for the broader Syrian rebel movement and partnering with Russia and the Bashar al-Assad regime to fight solely against Islamic State.”
17.02.06 The Japan Times : “The new president has advocated working with Russia to combat the Islamic State group in Syria. “If Russia helps us in the fight against ISIS, which is a major fight, and Islamic terrorism all around the world, major fight. That’s a good thing,” Trump told Fox.” / “Trump’s repeated criticism of NATO — a common target for Putin — has only fueled suspicions that Trump is ready to side with Moscow over allies in Europe.”
17.01.28 Newsweek by Reuters : “Russian President Vladimir Putin and U.S. President Donald Trump agreed to try to rebuild U.S.-Russia ties and to cooperate in Syria, the Kremlin said on Saturday, after the two men spoke for the first time since Trump's inauguration.”
16.12.06 Bloomberg : “Trump said during the campaign that the U.S. has “bigger problems than Assad” and that as president he’d “bomb the hell” out of Islamic State. He said he’d coordinate the effort with Putin, something the Obama Administration has so far refused to do.”
16.11.12 Independent : “Mr Trump has stated that while he “did not like [Mr Assad] at all”, shoring up his regime is the best way to stem the extremism that has flourished in the chaos of the civil war and threatens the US. He has also been emphatic about mending ties with Russia, Syria’s long-standing ally and military backer in the conflict. “Russia is now totally aligned with Syria, and now you have Iran, which is becoming powerful, because of us, is aligned with Syria… Now we’re backing rebels against Syria, and we have no idea who those people are,” he told the Journal, referring to the hardline Sunni Islamist elements present in rebel ranks. If the US attacks Mr Assad, “We end up fighting Russia,” he added.”
Translator's comment: My analysis based on the above articles is that there are evidences supporting that Trump administration wants to (1) fight against ISIS, implying standing by the side of Assad government, and (2) improve relationship with Russia. There is little evidence proving or suggesting the correlation between the two points.
17.01.24 NHK News : It says Trump administration is positive in cooperation with Russia (though not explicitly states if it’s only on Syria civil war or overall foreign policy). It also said Trump expressed wish to improve relationship with Russia and may confirm Russia taking lead in this issue.
17.01.24 Nikkei : It says Trump expressed wish to improve relationship with Russia since election campaign, pointed out ISIS is threat and mentioned possibility to cooperate with Russia on this issue.
17.01.22 NTV News24 : It states that US will send ambassador to attend the peace talk and “Trump administration which wants to improve relationship with Russia for the first time cooperate with Putin administration on international stage”.
17.01.18 NTV News24 : It states that Russia’s invitation to Trump administration to the Syria peace talk indicates a willingness for the two countries to improve relationship.
16.11.11 WSJ Japan : It hints the correlation between that Trump wants to improve relationship with Russia and that change of Russian policy including Syria.
Translator's comment: It seems Japan media are more active in correlating “improve relationship” and “ally Russia in Syrian civil war”, while Western media tend to put the focus on Trump’s determination to fight against ISIS.

Honestly, we did sooooo much research for this Ichimen, we felt like we were working for News Zero (quite a nice feeling actually XD Oh Sho-san, what you'll make us do!). It made us appreciate Murao-san knowledge further more too, because we had to search really far to understand where his comment was coming from. Really a knowledgeable man, you can tell he reads A LOT!